“When I look into the eyes of an animal, I do not see an animal. I see a living being. I see a friend. I see a soul.”
A.D. Williams

“Pets reflect you like mirrors. When you are happy, you can see your dog smiling and when you are sad, your cat cries.”
Munia Khan

“Pets bring vital energy to our homes and lives. Pets communicate many messages about love and connection. Care tenderly for all pets throughout their precious lives. The interspecies dance of love softens and expands the heart.”
Laura Staley

“Pets are humanizing. They remind us we have an obligation and responsibility to preserve and nurture and care for all life.”
James Cromwell

“Until one has loved an animal, a part of one’s soul remains unawakened.”
Anatole France

In 2016, in an effort to expand Kuhn Funeral Homes’ ability to better serve all that call on them, the Kuhn family began the added service of caring for a family’s beloved pet.

Pet Cremations by Kuhn is an extension of the care that we have provided to our friends for over 80 years. That is: caring, compassionate service to anyone that calls on us when they have experienced a loss. The hallmarks remain the same with our pet cremation service:

We love pets — in fact, our entire full-time staff are all pet owners. Here is some information about our staff: 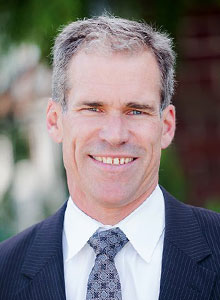 Mike is the husband of Rachel (Winans) Kuhn. Most important to Mike is spending time with his wife, Rachel, their children: Mikey, Molly, and Brady, and the family dog, McCoy.

With 25 years of valuable experience, Mike knows the importance of treating fellow human beings and pets as if they were members of his own family. The funeral home’s pillars of hard work, professionalism, dedication, empathy and humility are carried over to Pet Cremations by Kuhn. 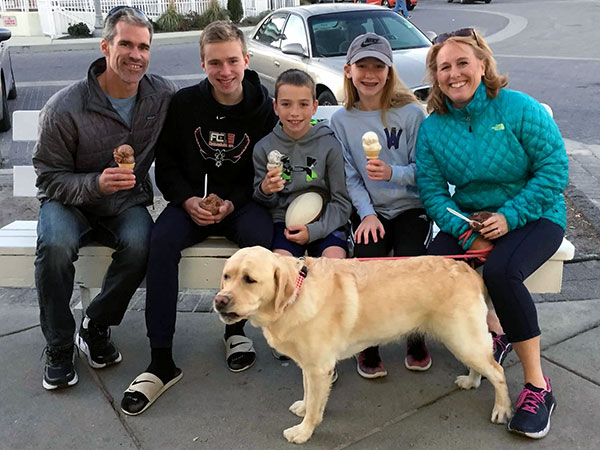 A staunch supporter of the Berks County community, Michael is proud to have a service that can provide local pet owners peace of mind knowing that our pet cremation service is available to anyone that may need us — 24 hours a day, 365 days a year.

Mike considers it a great honor and privilege to continue the legacy of caring, compassionate, and dignified service to those that call on Kuhn Funeral Home for a third generation. Now with the additional pet cremation services, our family business is finally there to help with all family members when family matters most. 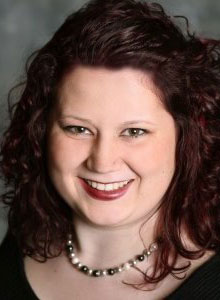 Samantha graduated from Gettysburg College with her Bachelor of Arts in Religious Studies before completing Northampton Community College’s Funeral Service Education program. She served her internship in Berks County and is proud to join Kuhn Funeral Home as a licensed funeral director and certified crematory operator. Samantha grew up in nearby Carbon County, and has been a Berks resident since 2018. She and her boyfriend, Max Hirneisen, owner and operator of West Reading’s own Symbiote Collectibles, reside in Flying Hills along with their cat, Morticia, a rescue from the Animal Rescue League. A passionate hockey fan, Samantha looks forward to attending many Reading Royals games. When not working in the funeral home, she enjoys exploring the local community. Samantha’s primary responsibilities include seeing families at their time of need and tending to loved ones entrusted to Kuhn Funeral Homes’ care in the mortuary.

Growing up, there was always a dog in the house. Mine was a bichon named Buddy. He survived so much and got me through my challenging teenage years. He was fourteen, blind, and suffering from cancer when we made the decision to let him go. Humanely euthanizing Buddy was the kindest thing my family could do for him; it was also the hardest decision I have ever made. Now four years later I still keep his collar and his paw print in a shadowbox on my bookshelf. I look at his picture every day.

When I moved to Berks County, I knew I wanted to have a companion, but I also knew that my life style would be unfair to a dog. As a young child, we had a fat, orange tom cat named Mr. Kitty. Because of my brother’s allergies to cats, we did not have Mr. Kitty long, but I could remember how great it was when he chose to come up to me and nuzzle me. Dogs give love freely and frequently; cats are more discerning. Cats also have a high level of independence that makes cats a natural fit for a young professional’s unpredictable life

So I started researching, and in the process I found the Animal Rescue League. I was excited that the ARL was taking actions to become a no-kill shelter, and I wanted to help make that a reality. I started reading bio after bio of cats on the ARL’s website, and one stuck out to me. “Lily, one year old, is a shy cat that takes time to warm up to people, but when she chooses you, she is a non-stop purr-er.” The cat was beautiful with a long tabby-pattern cat and bright green eyes. I had to meet her. 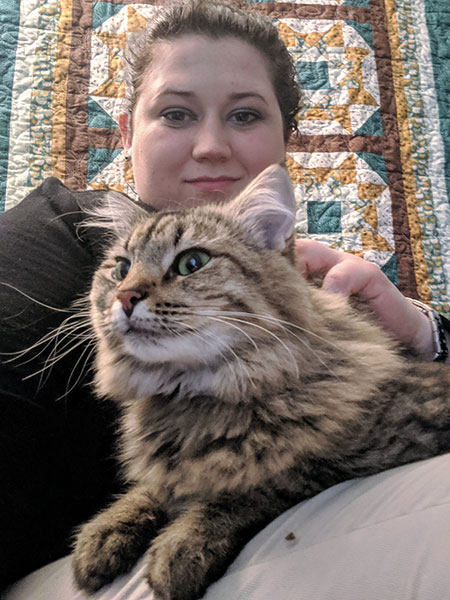 So I took the drive to Mulhenberg to the PetSmart ad was lucky enough to arrive just as the volunteers for the ARL came to feed the cats housed at the pet store. “Lily” had been a feral kitten rescued by the organization, and had been with the ARL for almost a year when I met her. It took five Feline Greenies and a lot of patience, but she eventually came out of hiding and let me pet her. I spent two hours kneeling on the floor of the play area with my future cat. I filled out her adoption paperwork that day. The next day I brought her home and christened her “Morticia Mia.”

September 4 we are celebrating the anniversary of Morticia’s Gotcha Day. She still loves Feline Greenies treat (catnip and tuna flavors only). It took her some time to be comfortable in our apartment, but she has claimed the bedroom window as her designated napping space. We spoil her rotten, and she has many, many toys to choose from — her favorite is a little catnip stuffed sloth. The best part of my day is coming home because when Morticia hears me unlock the front door, she materializes from the windowsill, fluffy tail high in the air like a beacon, with an inquisitive “pert” and demands for affection. Morticia’s adventures can be followed on Instagram. 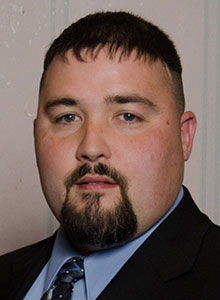 Chris is a life-long resident of Berks County. He is a graduate of Wilson School District and Shippensburg University and has been employed part-time through Kuhn Funeral Home since 2005. He resides in Wernersville with his wife and two children. Growing up, Chris had his share of hamsters, tropical fish and a cat. Once married with his own family, they would adopt a cat, Jasmine, from the Humane League of Lancaster County. They would add a king snake, turtle and their beloved chocolate lab, Toby. 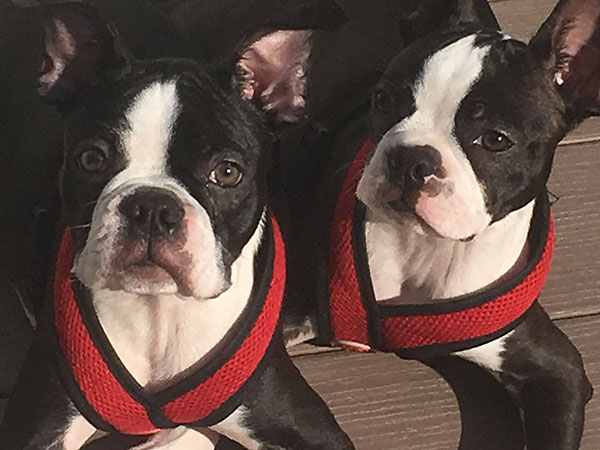 For 16-1/2 years, Toby was a loyal friend and companion and an integral member of the Reed family. His passing in 2018 left a void that would take six months to overcome. On Memorial Day in 2019, the Reed family welcomed not one, but two Boston Terrier puppies to the family. Leo and Rocco, while not birth brothers, were born one week apart to the same breeder and are truly brothers in every sense of the word. Like only puppies can do, they have used their charm, loving demeanor, unwavering energy and their undeniable cuteness, to breathe new life into the Reed household. Chris is intimately aware of how important pets are to a family and looks forward to providing compassionate and professional care to all families who have lost their beloved pet. 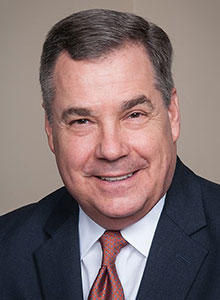 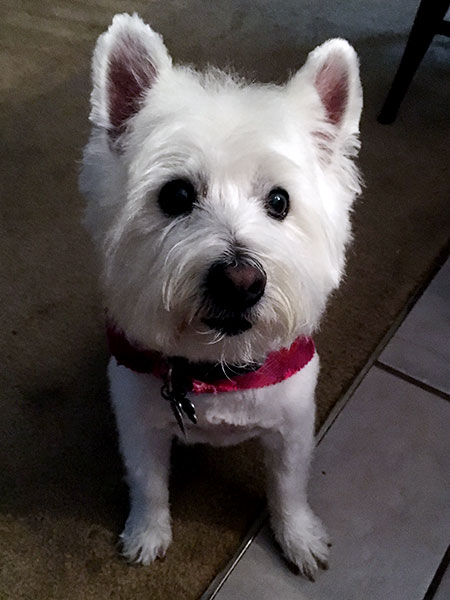 A licensed insurance professional, Jerry works very closely with families to plan a very special funeral to honor a loved one who recently passed, or to explore the myriad of options available as you pre-plan a future funeral service. Jerry approaches every family with great compassion and unique care.

“It is truly an honor that families think of us first in their time of need. We can never lose sight of the fact that we are helping families through what may be one of the most difficult times of their lives. There’s nothing more rewarding than when a family tells us how easy we made their experience, and how they wouldn’t have wanted to go through this with anyone but us.” 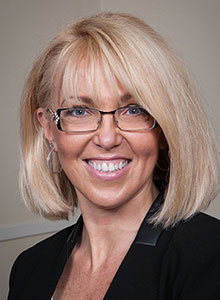 Deborah L. Evans resides in Leesport with her husband Rodney A. Evans. She has two children, Jennifer, wife of Drew Leck, and Brandon, husband to Karli Evans. Deborah is also a proud grandmother of three grandchildren, Jackson and Westley Leck and Emersyn Evans. Debbie attended Exeter High School, Reading Area Community College and Empire Beauty School and is an active member of the West Reading/Wyomissing Rotary Club, Greater Reading Chamber of Commerce and Women to Women. Debbie enjoys participating in community events and building relationships through her participation in these organizations. Being an integral part of the Kuhn Funeral Home team since 2005 her compassion, kindness and work ethic are true assets to our funeral home. Deborah appreciates the opportunity to practice a service above self philosophy to the community and families she serves. 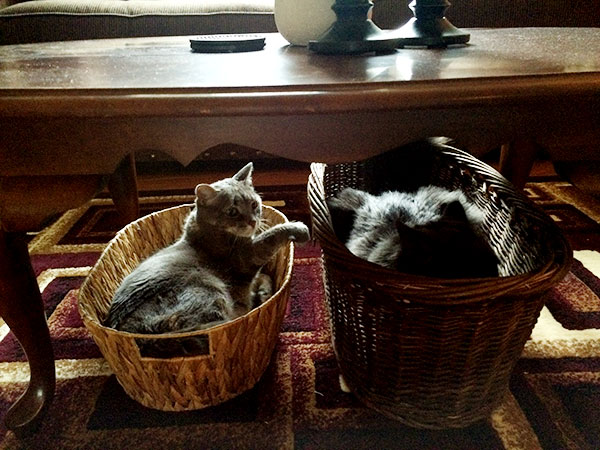 It’s like a quote from John Grogan, American Author. “Such short little lives our pets have to spend with us, and they spend most of it waiting for us to come home each day. It is amazing how much love and laughter they bring into our lives and even how much closer we become with each other because of them.”

Nothing brings me greater joy than to have my cats wait for me at the door when I come home from work only to find out they both want me to feed them their supper.